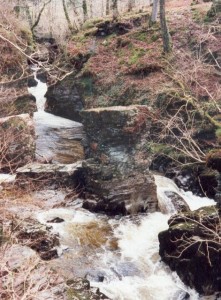 Pulpud Huw Llwyd – A “stack” in the middle of the Afon Cynfal. Supposedly preached from by the 17th century preacher of the that name.
© Copyright Dewi and licensed for reuse under this Creative Commons Licence

Well, that turned out to be a pleasant surprise… I (Adam) knew in advance that a few regulars wouldn’t make it to the storytelling this evening, but come 7:59pm, it was looking like I might be telling tales to myself… then in rapid succession we had a number of folk turn up… we had 11 in total, although it still looked like I may be the only teller for the evening. So I started of with the story of Huw Llwyd and the two witches… Huw was called in to investigate a series of thefts in a local hostelry that, it turns out, were performed by the landladies, two sisters skilled in the arts of witchcraft. In the end he divests them of their power. I also expanded on the live and death of this poet, philosopher and warrior from the 16th century. This jogged Jim’s memory somewhat and so he told the tail of a tailor who mistook a cow for the devil, which reminded me of a tale, told before, of Halter Devil Chapel. This further reminded Jim of a story of how a monk, having spent some convivial time with old Nick, convinced him to build a bridge as proof of the time they spent together. Then a lady who was on her second visit, Louise, offered up a tale of a true encounter with two elderly ladies in Saltburn who were busy enjoying an evening of heavy metal music at a club in Saltburn.

We seemed to be in a vein for true stories and true to the theme of the devil, I offered up a personal childhood experience of some of the myths and legends of Olney, including the grave of John Newton and how one may encounter old Nick there after dark. Keith, who had been last month, told a couple of his wife Nina’s poems, before Doran offered up a tale of an encounter with a consultant.

I trotted out the story of Tam Lin and Jim finished the night with a tale told many months ago by a visiting teller, about the man who became trapped in a supernatural experience with a sloe bush.