Cancelled due to unforeseen circumstances

Elements of Enchantment is an experimental, experiential workshop exploring the role of trance in the creation of the storytelling and story-listening experience. It is an opportunity to explore elements of storytelling from a hypnotist’s perspective and elements of hypnosis from a storyteller’s perspective, to more fully understand the techniques and strategies available to the storyteller to create this experience of being transported to the other world of story. 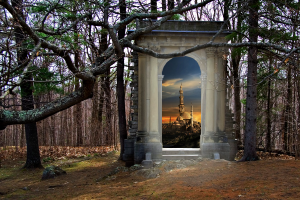 The king said, “Far-li-mas, today is the day you must make me happy. Tell me a story.”

“No sooner said than done,” Far-li-mas replied, and began telling a story. The king listened. The guests listened. The king and the guests forgot to drink. They forgot to breathe. Far-li-mas’ story was like hashish. When he finished, all were immersed in pleasant oblivion. King Akaf had forgotten his thoughts of death. None of those present had noticed that Far-li-mas had been talking straight through the night. By the time the guests took their leave, the sun was already high.

The Ruin of Kasch by Roberto Calasso

There was an internet meme circulating a while back that listed words from languages other than English that encapsulated concepts that had no single word in English itself. Once such word is the Urdu “goya”, which is said to refer to a “contemplative ‘as-if’ which nonetheless feels like reality. The transporting suspension of disbelief that can occur, for example, in good storytelling.”

I have had an interest in the relationship between trance states and storytelling since the first time someone walked up to me after a storytelling session and said “It was like I was actually there”. As I was already practicing NLP and hypnotherapy, using stories in my practice, I decided to turn things on their head and look at how these disciplines manifest in the art of storytelling, allowing the storyteller to weave a trance that can transport the listener to the realms of faery themselves.

The workshop will be held in York on Saturday the 20th August 2016, from 10am until 4pm. Costs will be kept low (£20) and places will be limited. To express an interest or book a place, please contact Adam on {This email is obscured. Your must have javascript enabled to see it} or use the above paypal button to book your place now